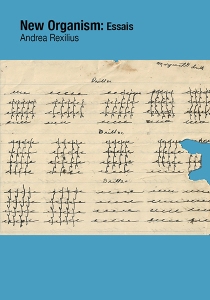 I remember, while still a student at Naropa University, sitting on the purple couch in Andrea Rexilius’ office. Sometimes she would share pieces of her latest work, New Organism, recently published by Letter Machine Editions. Sentences like, “I want to think like a magi; the way stones underwater reflect grief,” and “we are pressing down the floorboards with our tongues. Marking the points of erasure of a person.” They always tugged at me… something about being a girl or a person, or a definition of a verb or a noun I couldn’t name.

And so I’m excited that the book has been released and that a copy sits on the Woodland Pattern shelves, waiting for the right hand to pick it up. I’m also grateful that Andrea took the time to answer, via email, some questions I had sent about her latest work, her poetics and how they weave with her performance work, including her involvement with GASP (Girls Assembling Something Perpetual), a poets’ theater group based in Denver, Colorado.

Woodland Pattern’s Amanda [Ngoho] Reavey: Do your studies in performance, and/or your involvement with GASP, inform how you approach the page? Or vice versa?

Andrea Rexilius: Early on I did a few performance exercises in Lin Hixson’s 2004 “Durations” class at SAIC (the School of the Art Institute of Chicago) that shaped how I came to think through performance into writing. The first exercise was built out of a single gesture. We stood for about an hour meditating, attuning to the nuances of our bodies, and at the end of that hour began to notice a slight movement within our bodies. We spent the next hour exaggerating this movement throughout the performance space. My gesture was a rubbing between the thumb and forefinger. I exaggerated this movement into a gesture of plucking an invisible thread from the ground and extending it into the air. When we had completed the hour of exaggerated movement we spent a few minutes reflecting on the meditation and the gesture. In my writing reflection I found the disparate gesture of the bird. Cultivating found influences (twigs, threads, moss) into the curation of the nest (form, ascension, boundedness). I extended this metaphorical gesture into writing: the way in which textual threads (sentences, insights) develop across the page. I thought about gravity and ascension in a piece of writing and drew the following mark: ^^^^^^^^. The hem.

In the next durational gesture I hung four white sheets (bedsheets) from the ceiling of the performance space. Actually, I couldn’t reach the ceiling, so I hung them around the four sides of the cherry picker (that wooden scaffolding that is used to hang lights from the ceiling). You could see into the inside of the space built by the four white sheets where I balanced on my stomach on the ladder of the cherry picker stitching “text” (migrational patterns of narrative is what I called it) through the front and back of the white sheets. This performance lasted for an hour and while the external view (a line of black or red thread moving through to the front of the sheet) looked extremely minimal, the view of the acrobatics on the inside of the sheets was physically excruciating. I spent the entire hour in the air, hooking my arms and legs in various configurations onto the ladder of the cherry picker. The reflection on this experience came to me years later and came out of renewed thinking about the “migrational patterns of narrative.” When I come to the page, to narrative (I define narrative as the trajectory or propulsion of a piece of text), I think about it in terms of a front-stitch and a back-stitch, or as having an undercurrent of movement (an unseen or unsaid intensity—what happened between the sheets). As a reader (of my own work and that of others), I consider both the front stitch—what is actually said in a text—the conscious parts, and the back stitch—the secret narrative trajectory, the current that is unknown or known only subconsciously to the writer during composition.

WP: How would you describe your poetics in relation to your latest work, New Organism?

AR: The narrative trajectory or migrational pattern of this most recent work was in relation to the act of “becoming.” I wanted to create discrete sections within the text that gestured toward the next transformational movement of becoming a new organism. In a recent conversation with Teresa Carmody at DU about the new book, she pointed out the way in which the sections of the narrative set up a situation of becoming subject through an unspoken trauma that is referenced, but not named in the text. While I did not consciously map out this exact movement, her reading did unveil to me what was unconscious in the structure of the text. The old organism then is an object and the trauma of the narrative is enacted on the self as object. The new organism (the female rhizome) becomes subject and speaks as such.

As a more general answer to this question, I would say my poetics is always in flux. I want each new book to push something further within myself as a writer, thinker, and person. I purposefully try to do things I may have rejected in previous books, to force myself to face the things (questions, investigations, formal constraints, aesthetics, etc) I avoided.

WP: Some of your ideas seem to carry over from your other works, including To Be Human is to Be a Conversation. Do you consider your books separate from each other? Or is there a thread?

AR: To weave again into the previous question, I secretly define my poetics, my pedagogy, my way of being in the world as “to be human is to be a conversation.” What this means is that my previous thinking, previous being, previous experiences are always becoming new, rethought, reconsidered in the present moment and on into the future. A conversation keeps turning, keeps asking questions, keeps thinking in the moment, demonstrating the ecstatic (human), as opposed to the static (not human). In this way I do not think of my books as separate from each other. But at the same time, I do also think of them as discreet documents that can be read separately from one another, or in any order really. They are demonstrative of a rhizomatic style of writing. For instance, the third book answers the question “What is the relationship between the text and the body in your writing?” that the first book leaves blank. I think of the answer as coming from the third book, in relation to the thinking inherent in that book, as opposed to the thinking of the first book, but I simultaneously see the way the third book is in conversation with the first one not just through this question, but in the way that it considers, in particular, research and relationship. In this way it extends upon and answers back to the first (and second) book. My most recent project also reaches back into this larger conversation by picking up the thread of gesture and residue. In other words, each book opens a detailed nuance of the larger whole. What that whole is doesn’t really matter, or it is “the conversation” whose center point is always evolving.

Andrea Rexilius is the author of three full-length books of poetry, New Organism (Letter Machine, 2014), Half of What They Carried Flew Away (Letter Machine, 2012), and To Be Human Is To Be A Conversation (Rescue Press, 2011), as well as the chapbooks, Seance (Coconut Books, 2014), and To Be Human (Horseless Press, 2010).  She is an Assistant Professor of Creative Writing & Poetics at Naropa University’s Jack Kerouac School of Disembodied Poetics, where she is also the Summer Writing Program Coordinator, co-coordinator of the What/Where Reading Series, and the co-founder and coordinator of the biennial conference [Dis]Embodied.

Woodland Pattern Book Center is a nonprofit dedicated to the discovery, cultivation and presentation of contemporary literature and the arts. Visit our website.